You may not have heard of David Wood, but he is known across Cal Poly athletics for getting the most out of every student athlete. In a career that has involved volunteering for UCLA and working at University of Alabama, Birmingham, Wood is now in his third year at the Cal Poly and really enjoys his craft.

Wood says a typical day involves him waking up early, usually opening the facilities at 6am, and then having teams working out all the way until 5 pm at night.

“Every workday creates a different scenario, you have athletes coming in feeling different everyday. Everyday is a new day I feel, I don’t feel everyday is the same thing where it’s repetitive,” Wood said.

Wood said it is hard to describe in a nutshell what exactly he does, but he could break his craft down into two areas.

END_OF_DOCUMENT_TOKEN_TO_BE_REPLACED

Posted by CoachesCornerSLO on May 30, 2012 in Profiles

Big West 2012 Conference Champs, the Mustangs will soon have a ‘2012’ embroidered into the tarp.

Behind Mott Gym, upbeat classic rock blasts from the speakers above as the tennis coaches and players yell encouragements back and forth.

At the edge of the Cal Poly tennis courts you can probably hear Cal Poly tennis head coach Nick Carless playfully yelling ‘Rip It’ at his players, receiving some smiles in return.

As a former Cal Poly student, Carless has the youth and homegrown experience to relate to his players. The Cal Poly alum has already coached the Mustangs to a Big West Conference Championship in just his first season at the helm.

END_OF_DOCUMENT_TOKEN_TO_BE_REPLACED

Posted by CoachesCornerSLO on May 9, 2012 in Profiles

Soccer is everything to Holocher. When he is not coaching the Mustangs, he is talking about, reading or watching the sport.

In the seven-year period before he came to Cal Poly, Paul Holocher served as the head soccer coach at UC Santa Cruz, Director of Soccer for Santa Cruz and its 5,000 youth players, and founded the Catalyst Soccer Club. He did all of this while also teaching physical education at the private school Aptos Academy.

“It was a labor of love, because it was four part-time jobs that all were interconnected to each other around the game of soccer. That’s kind of how I piecemealed my livelihood together,” Holocher said.

Holocher grew up in the soccer-oriented environment of Seattle, Washington. His father was a former goalkeeper, and his mother grew up around soccer as well. He said soccer was a big part of his childhood and his father would take him and his brother to every Seattle Sounders game, the MLS club in Seattle. Holocher said he regularly attended Sounders’ games, and he didn’t think he missed one home game.

[Seattle] has an amazing soccer culture. Every kid up in Seattle plays soccer. You start when you’re seven years old, and there’s a lot of passion around it,” Holocher said. “I remember the very first game I ever played, I was playing on a little team called the King Fishers. I remember picking up the ball and being able to dribble and do good things. I scored a couple goals and after the game I got a lot of compliments from the team and the parents, and I realized that I loved the game,” Holocher said.

END_OF_DOCUMENT_TOKEN_TO_BE_REPLACED

Posted by CoachesCornerSLO on May 2, 2012 in Profiles

Larry Lee: In His Family’s Footsteps

Lee said "I've known the path I've been on since junior high."

For over the past 25 years, Larry Lee has been following in the footsteps of his father and brothers.

“I usually drive past the [football memorial] every night going home and I give it a special moment each night. I think about those guys, and how my dad was supposed to be on that plane flight, but his schedule got changed. It holds a special place in my heart,” Lee said.

Lee said, “He did it all, and everything my brothers and I did was based on what he was all about.”

END_OF_DOCUMENT_TOKEN_TO_BE_REPLACED

Posted by CoachesCornerSLO on April 25, 2012 in Profiles, Uncategorized

Callero in his office.

At one point in his life, Joe Callero worked as a carpenter in the morning, assistant coach in the afternoon, and attended Seattle University’s masters program in the evening.

He did all he could to coach basketball, and more importantly to coach people.

“My first job was coaching summer league for Foster High School’s junior varsity team, and my payment was a hamburger and a beer after the game by the varsity coach,” Callero said.

Graduating with a bachelor’s degree in psychology from Central Washington, and then a master’s in counseling from Seattle University, Callero used his education to better his coaching.

END_OF_DOCUMENT_TOKEN_TO_BE_REPLACED

Posted by CoachesCornerSLO on April 18, 2012 in Profiles 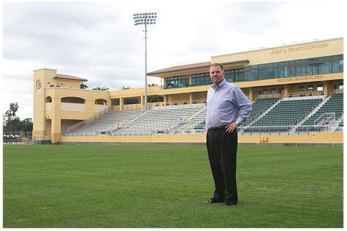 Life is bigger than football. To Cal Poly Head Football Coach Tim Walsh, there is much more to the game of football than what transpires on the field.

In 1972, as a senior quarterback at Serra High School in San Mateo, California, Walsh’s Padres had a game in San Jose. It was that day Walsh said he gained a new perspective on football.

“There was a mini riot at the game. One of our players had his helmet off, and somebody out of the stands took his helmet and wacked him across the head. Then, he was in critical condition and to be honest, he was never the same again. At that moment, I realized that there are a lot of things out there more important than football, and I realized that not everybody’s life skills are on the same level,” Walsh said.

END_OF_DOCUMENT_TOKEN_TO_BE_REPLACED

Posted by CoachesCornerSLO on April 11, 2012 in Profiles